The bringer of light

Have you taken a photo of this huge, golden relief? Do you think the relief is pretty? Would you buy a postcard of it? If you could take the relief home with you, where would it look good? Do you want to have it? You can take the relief with you; it is no longer needed. If you lend a hand for moment, we’ll just take it right off the facade.

You aren’t sure? Then let’s take a couple of steps back. You heard you just have to look at the Böttcherstraße because of the art and idiosyncratic Northern German architecture of the twenties. The Paula Modersohn-Becker Museum is located on Böttcherstraße; you wanted to go inside. But first, let’s go back, step-by-step. Five steps, fifteen, twenty, until the motif of the relief isn’t fully clear anymore. The further we go, the more unclear it becomes: at one point, all we see is a shiny, golden square. And the closer we get, the more we see. 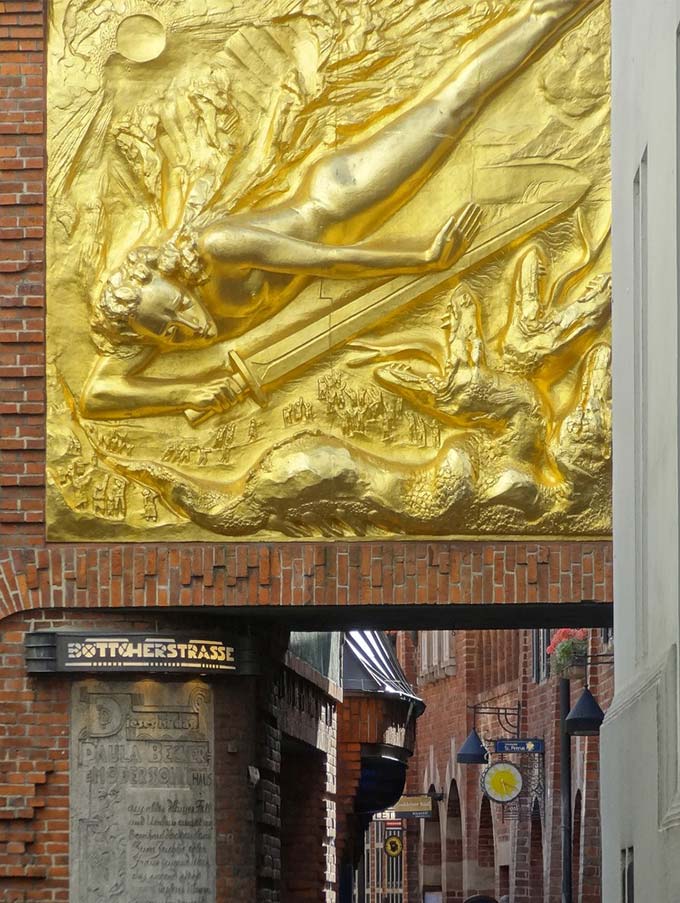 What do you see?
What do I see?
A golden boy. Or not. I can’t actually tell what his gender is. So, I see a nude person with a flat chest and shoulder-length hair wearing an over-sized sword. A smooth, stretched-out body jutting from the relief as though it might dislodge at any moment and fall to the ground in Bremen’s market square. I see a turbulent sky above the figure’s back and a heavenly body at the top left. I see several tiny human bodies on the ground. And a dragon’s body. – I see an image that disturbs me. An image that I would describe as askew if it were in a text. An image that doesn’t work. What kind of text would the relief be? A tragic epic poem? A verse from the Nibelungenlied? A legend of a Catholic saint? Or an overblown fantasy novel?

Of course, I see something you don’t see. What remains invisible?
What I don’t see is the number 1933. It was, after all, omitted by Bernhard Hoetger, the artist, although he would have liked to emboss it on the relief as he asserted in his letters from the thirties. He just didn’t want to get too obviously chummy with Hitler. In 1936, when the relief was created and mounted on the facade, the National Socialists had already been in power for three years, and Hoetger supported the Nazi dictatorship with full conviction. Hoetger joined their party, the NSDAP, in 1934 the Nazis’ did not reciprocate his appreciation nor did they appreciate his art: the fact that the Nazis rejected his art and labeled it as “degenerate” does not make the originator a critical artist by any stretch of the imagination. Although he was excluded from the party in 1936, Hoetger remained loyal to the Nazis and created a relief that same year which he dedicated to Hitler to honor him and his deeds. That is the relief before which you now stand.

Contrary to what was alleged after the war and until today, letters from Hoetger and Roselius prove the relief was not meant to depict the Archangel Michael, but instead the “Führer’s victory over the forces of darkness”. Hoetger gave it the title “Light Bringer”, which referred to none other than Adolf Hitler, whose name famously does not stand for light, but for the destruction of many millions of people, especially Jewish people, throughout all of Europe.

So, what kind of text would the relief be? A national-socialist ode? A flattering letter to Hitler? A turgid Germanic fairytale that glorifies violence? 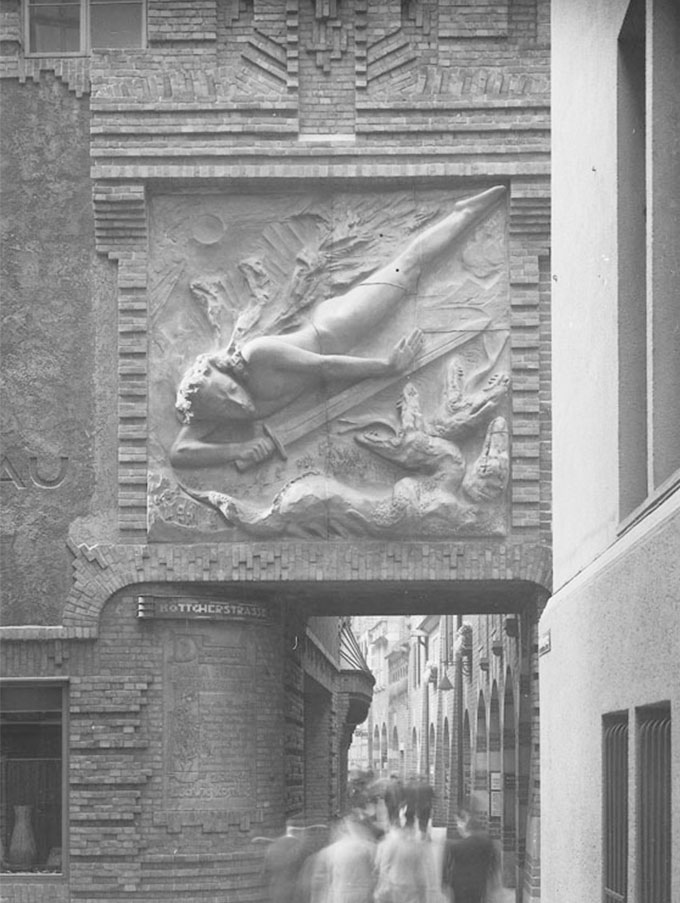 And now we will take the relief down, right?

And now we will take the relief down, right? Do you delete the photo on your cell phone? How can we address works of art in public spaces today that were created in a Nazi context or during the colonial era?

I think the “Light Bringer” needs to be moved into the light it casts: an unflattering light. Those who look behind the golden facade can see it casts a long shadow. Perhaps it should make way, for instance, for a piece from Paula Modershon-Becker. When you go into the museum in a moment, notice what you see and what you don’t see, and which piece might better adorn the facade than the “Light Bringer”. I am certain Paula Modersohn-Becker would be a good facade saint for the Böttcherstraße and a shining one too. .

The bringer of light